Peter Knight is a former senior manager at BHP and economist at the Reserve Bank who has studied High Speed Rail (HSR) for two decades.

He was educated at Camberwell Grammar School in Melbourne, Victoria; Longerenong Agricultural College near Horsham in North-west Victoria and at the University of Melbourne. He has an MBA from the Melbourne Business School.

After working in agricultural sales and accounting Peter joined the Reserve Bank of Australia at its inception in 1960. He gained his first degree in Commerce with the support of the RBA, including two full-time final years, graduating with Honours. He became an Economist and joined the Australian Metal Industries Association, preparing the employers’ side of the annual National Wage Cases.

At the invitation of BHP, Peter became the Senior Economist. The Company supported him in earning the MBA – the final year full-time. He became Manager Corporate Planning under Jerry Ellis, who subsequently became Company Chairman.

Peter Knight developed the first business plans for BHP, briefing individual BHP Company Directors. When BHP was enlisted as a Very Fast Train Consortium member in the mid-1980s, Peter was appointed as a BHP representative on the VFT Advisory Board, Chaired by Dr Paul Wild, CEO of CSIRO, during the five years of the VFT feasibility study.

After retiring from BHP, Peter founded The CEO Circle Pty Ltd in 1994. It formed small groups of CEOs from large companies who met for mutual advice. Each group was chaired by an ‘elder statesman of business’. Under Peter’s leadership as CEO, The CEO Circle expanded rapidly to seven groups in Melbourne, seven in Sydney, two in Brisbane and five in London. It grew to be an international company with eleven staff and twenty part-time Chairmen.

Peter has demonstrated his skills and experience in economics, business strategy, marketing, entrepreneurship and leadership.

He is now focused on promoting High Speed Rail for Australia with a strong commitment to making it happen.

Peter Knight was born in England and migrated to Australia in 1948, becoming an Australian citizen in 1976. He is married to Gloria and lives in Melbourne and West Gippsland. They have four children and seven grandchildren. 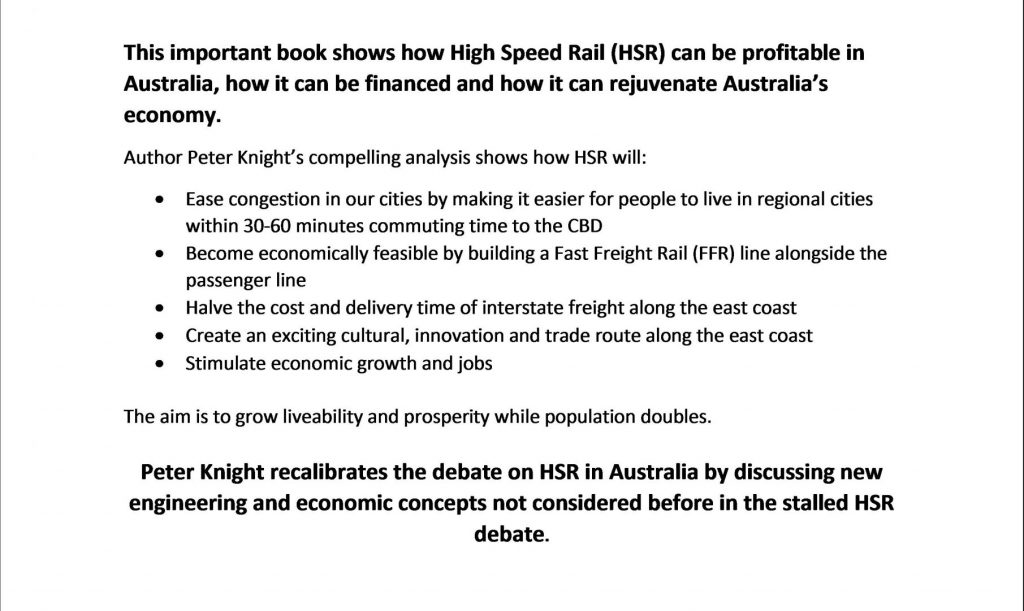